The goal of the 1.1 MW Photovoltaic Applied Research and Testing (PART) Lab is to perform long-term operational testing of a commercial-scale photovoltaic electric generation system under actual conditions in Louisiana.  We are doing this to build local capacity for building, maintaining, and operating such a system; to gain experience integrating renewable and non-renewable power usage within the university; to determine the scalability of the technology; to determine the overall feasibility of the installation of MW-scale solar power plants in Louisiana; and to disseminate the knowledge gained from this project to the public. 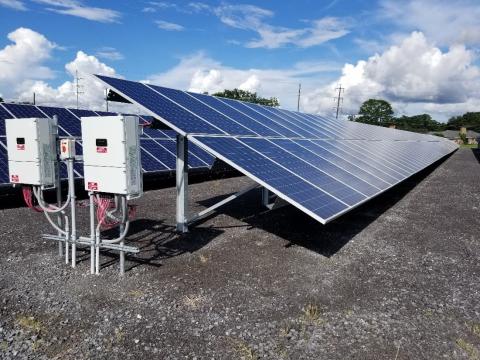 The primary types of technologies demonstrated are different types of racking systems, solar modules, and power electronics.  The bulk of the system incorporates traditional fixed-tilt ground mount racks.  Some modules will be mounted in landscape and some in portrait.  Planned future research will include the testing of solar modules using both single and dual-axis trackers.

Various types of solar modules are being tested, including monocrystalline silicon, polycrystalline silicon, and thin film.  The system was built with a combination of power electronics including string inverters, and power optimizers.  The system was designed to incorporate battery storage at some point in the future.  A list of the equipment in use is shown in Table 1.

Based on the preliminary design, it is expected that the PART Lab will produce approximately 1,900 MWh/year and offset the equivalent of 950 MT of CO2.