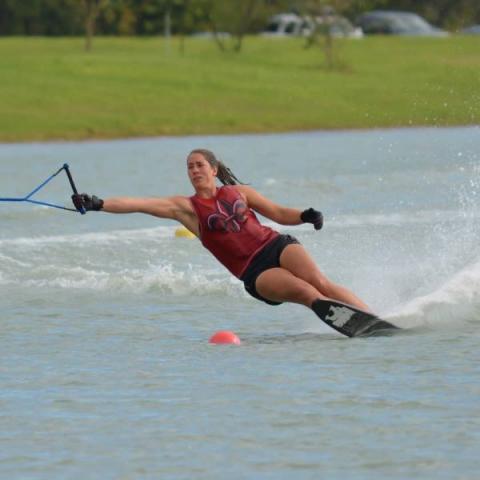 The Mechanical Engineering Department is proud to count a waterskiing champion among its student body.

Jaimee Bull, who plans to graduate from the University of Louisiana at Lafayette with a degree in Mechanical Engineering in May, raked in enough wins to place her in the lead of the Waterski Pro Tour this year!

The UL Lafayette student and competitive water skier won the US Masters, Open World Championships, U21 World Championships, Hilltop ProAm, Stillwaters Challenge and the Lake 38 ProAm. She won second place at the Malibu Open, Swiss Pro Slalom and the US Open. If that was not enough, she set the U21 World Record this season, with two buoys at 10.25m.

In addition to competing as an individual, she is a member of the Ragin Cajun Waterski Team, which won first place at the recently held National Championships. Bull won the individual event of Women’s Slalom as well.

The mechanical engineering student was first introduced to waterskiing by her family. Her older brother started competing as a 12-year-old, and watching him compete inspired her to take up the sport competitively as well. At 14, she started competing internationally in the junior division. She won the U17 World Championships in Santiago, Chile in 2016. Ever since that win, she has competed in professional waterskiing events.

Bull said she had a great spring training that set her up well for this season. With her classes going online during the spring semester due to the pandemic, she was able to live with her coach in Florida, training every day at the Jack Travers Ski School.

This fall was a bit more challenging, as she had to reduce the amount of time she could spend on training, so she was nervous about how well she would do at the Malibu Open and the World Championships. Despite her nervousness, she did great at the Malibu Open. She then spent 10 days in Florida with her coach to prepare for the Worlds.

“It was enough time to allow myself to feel confident in my training and I ended up claiming the title of World Champion,” she said.

Read more about her recent waterskiing successes from the BayToday.

Bull competes in slalom, which involves a skier being pulled behind by a boat going 55 kilometers per hour for women and 58 kilometers per hour for men. The skier has to navigate through a set of entrance gates, around six buoys and out of a set of exit gates. Skiers who complete the pass then shorten the rope to increase the difficulty. The shorter the rope, the harder it is for the skier to get outside the buoys. Skiers continue to shorten the rope until they fall or do not complete a pass. The winner is the competitor who has the most buoys at the shortest rope length, she said.

Bull plans on continuing to pursue professional waterskiing after graduation this spring. While her academic plans are not yet settled, she is thinking of furthering her education in either biomedical engineering or at medical school.